Curaçao, the Dutch Netherland Antilles, is located in the southwestern Caribbean, at latitude 12° North and longitude 68° West at at 171 square miles. The Island is 56 Km (35 miles) off the coast of Venezuela and a 2 ½ hours from Miami. Curaçao’s Hato International Airport is on the north side of the island, approximately six miles from Willemstad.

One of Curaçao’s most distinguishing features that sets it apart from the other Dutch Caribbean islands is its capital city, Willemstad. This incredibly well-preserved city has been designated as a UNESCO World Heritage Site, which is a rarity in the Caribbean. It’s made up of four quarters, including Punda and Otrobanda, which are separated by an inlet called Sint Anna Bay that in turn that leads into a large natural harbor called the Schottegat. 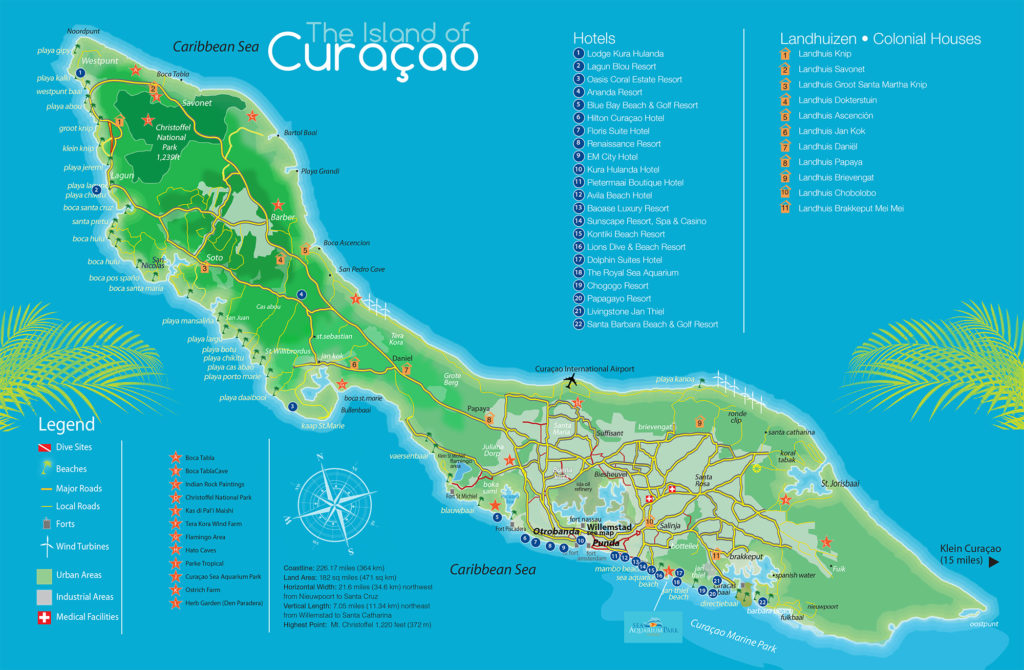 Dutch is the official language while Papiamentu is commonly used. English and Spanish are widely spoken.

When you arrive at the Curacao International Airport, you're greeted by not only the warm breeze and friendly smiles, but also with a sign that says Bon Bini or Welcome in the local language called Papiamento. Revered for its sandy beaches and cosmopolitan flair, what also make Curacao inimitable are the many languages spoken by islanders.

Although Dutch is the official language and English and Spanish are widely spoken, a mélange of Spanish, Portuguese, Dutch, French, English, African and Arawak Indian called Papiamento is also heard on the Dutch islands of Curacao, Aruba and Bonaire. One of just a few Creole languages that have survived to the present day, Papiamento is based on words in the Spanish and Portuguese dictionary.

Visitors are able to quickly learn a few phrases in Papiamento like ‘kon ta bo number’ which means ‘what's your name, ‘mi ta bai bon, danki’ which translates to a simple ‘I am fine, thank you’ and the word ‘dushi ‘which you’d use to grab the attention of your sweetie.

Curaçao has a warm, sunny climate year round, with an average temperature of about 27°C (in the mid-80°F).

Rainfall averages only 22 inches a year. Despite the near-constant sunshine, trade winds keep the islands cool with an average year-round temperature of 82 degrees all the while guaranteeing tourists average water temperatures of a very comfortable 80 degrees.

Visit www.eventscuracao.com to know more about where you will be heading soon!